You're Browsing Offline - Some functionality will be limited.

We love that our hoodies, joggers and loungewear are popular clothing choices for gamers around the world
- if you’re after stylish, comfy outfits for your all-day gaming session then we definitely have you covered.

We love that our hoodies, joggers and loungewear are popular clothing choices for gamers around the world - if you’re after stylish, comfy outfits for your all-day gaming session then we definitely have you covered.

But we wanted to know a little more about what makes gamers tick - what are the games that you can’t get enough of, and who are the streamers you follow the most?

Across the world, millions of gamers are pulling all-nighters with their friends online or catching up with their favourite streamer’s activity every day. In fact, there’s an estimated 3.24 billion gamers globally and the industry itself is worth a staggering $300 billion according to a recent report.

Twitch, the live streaming service that is most famous for video game streaming, has an estimated 9 million users stream on its platform every month. The world’s biggest online streamers rack up millions of hours of watch time each and every month and make some serious money from their gaming broadcasts whilst building an empire of loyal followers.

In fact, according to sources such as Influencer Marketing Hub, top Twitch users can earn average revenues of around $250 per 100 subscribers, with the top 10 most followed Twitch streamers estimated to be earning over $20 million between them.

So, with gaming being one of the most popular and lucrative forms of entertainment out there right now, we were curious to discover the most popular video game and Twitch streamers in the world - and how this changed country by country. We analysed Google data to find the most searched for games and streamers around the world, and here are the results.

THE MOST POPULAR VIDEO GAMES IN THE WORLD

When it comes to the most searched for games in the world, there were two clear favourites that emerged - Fortnite and Minecraft.

Fortnite was revealed as the most popular video game in the world, with the online game being the most searched for in 106 countries, including the UK, USA and Australia. Minecraft followed in second position with 51 countries, from Brazil to Thailand, searching for the sandbox video game the most.

GTA V, action role-playing game Genshin Impact and hero shooter game Valorant made up the top five most popular video games in the world, with GTA V being a firm favourite for two countries - Bangladesh and China - and Genshin Impact and Valorant each having one country searching for them the most. 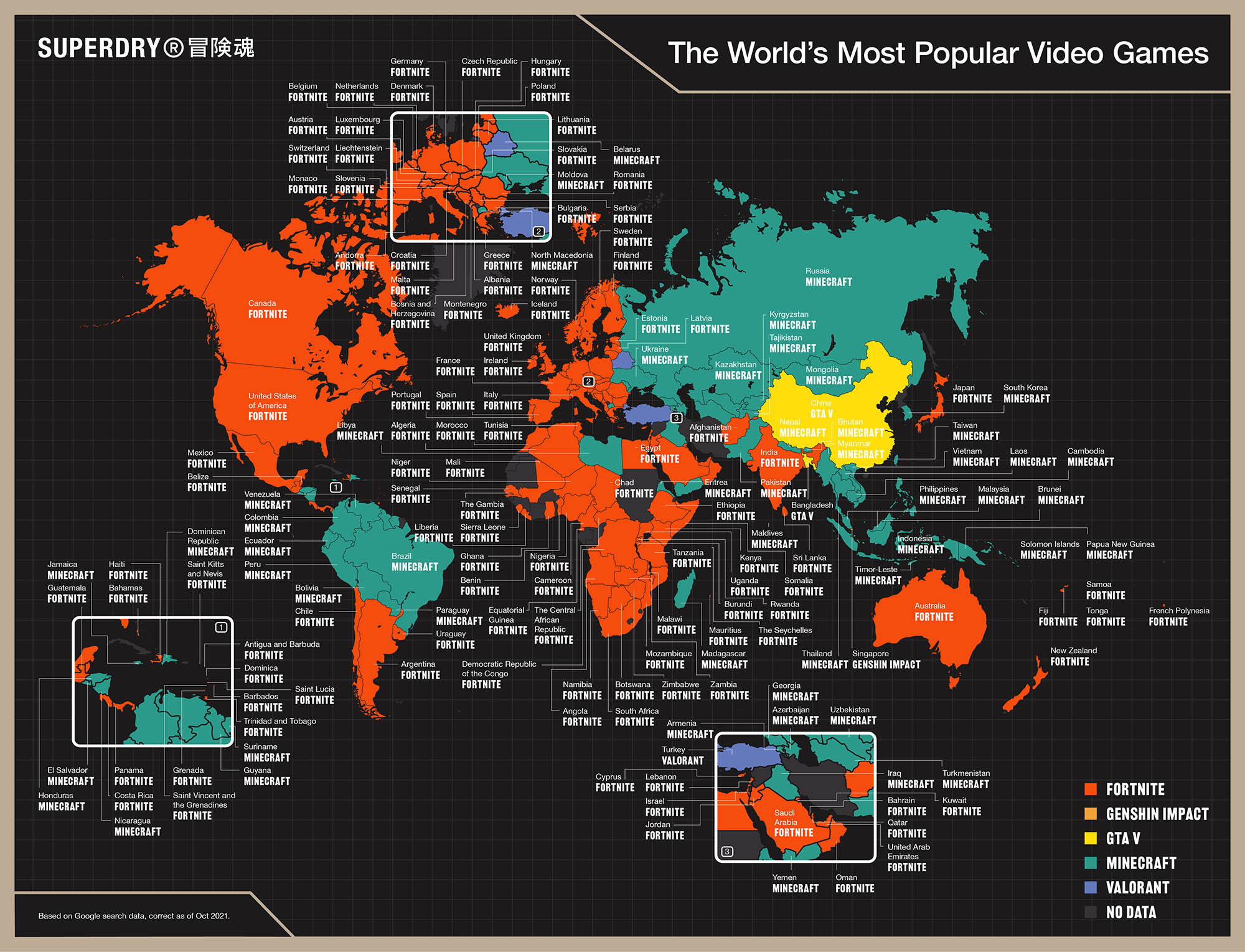 THE MOST POPULAR TWITCH STREAMERS IN THE WORLD

With Twitch viewerships increasing year on year, we took a look at the most searched for Twitch streamers, for those who love watching all things gaming, as well as playing them.

American Twitch user and YouTuber Ninja was revealed as the most popular Twitch gamer in the world, with a total of 46 countries searching for his Twitch username the most, including Albania, Thailand and Vietnam. Known for streaming Fortnite (the world’s most popular video game, according to our study), as well as royale-hero shooter game Apex Legends, Ninja has over 17 million followers on Twitch.

TommyInnit, an English Twitch streamer with over 6.7 million followers, ranked in second position, with 36 countries searching for him the most, from the UK and Australia, to the UAE and Singapore. His videos are largely Minecraft-related - the second most searched-for game in the world according to our research - which may explain his popularity across the globe. 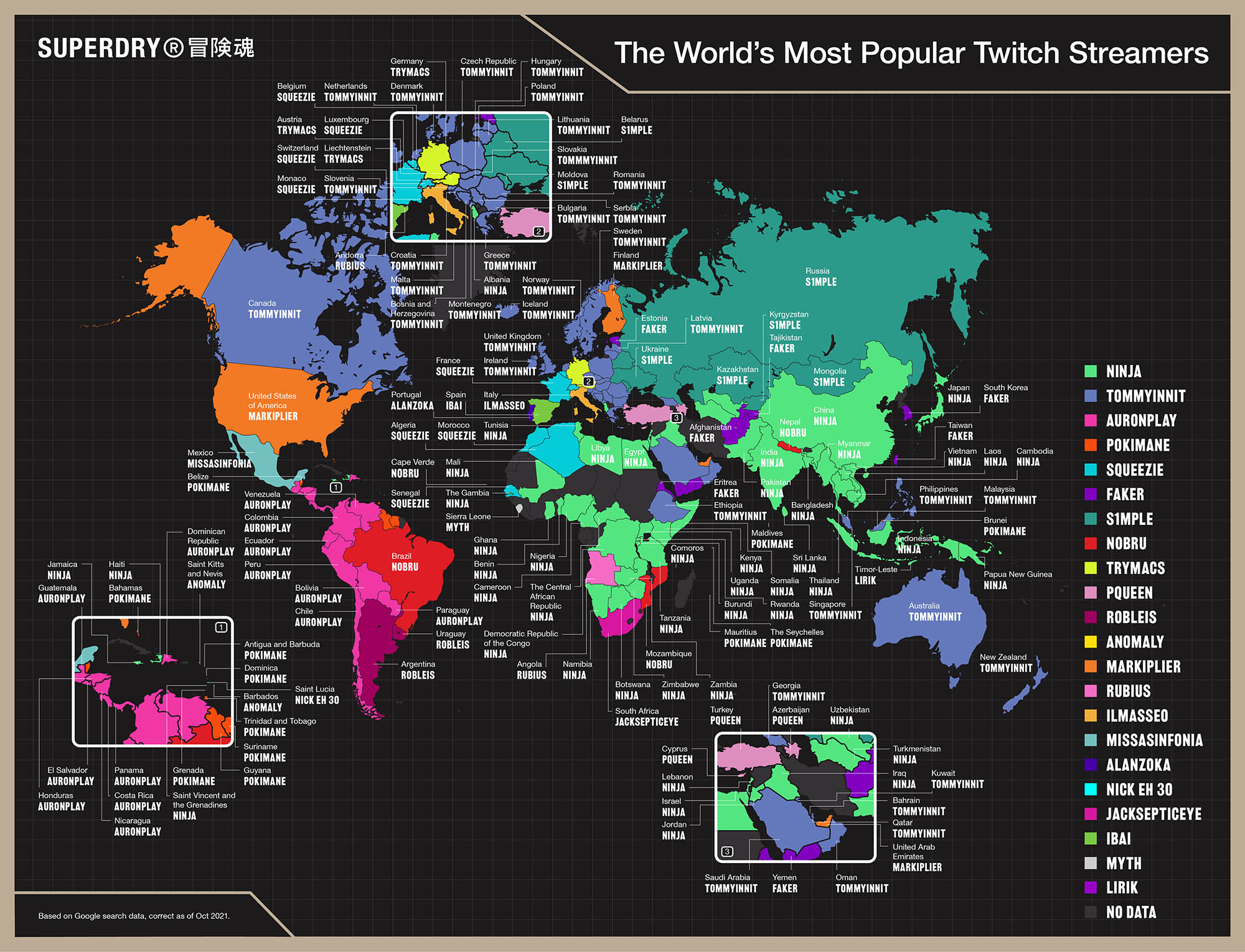 EUROPE’S MOST SEARCHED FOR GAMES AND STREAMERS

English Twitch gamer TommyInnit topped the list of the most popular streamers in Europe; in fact, he topped the list in 24 countries. This was followed by French Twitch user Squeezie with five countries (including France) Googling his username the most, and Ukrainian player s1mple, who was the most searched for in Ukraine, Russia, Moldova and Belarus. 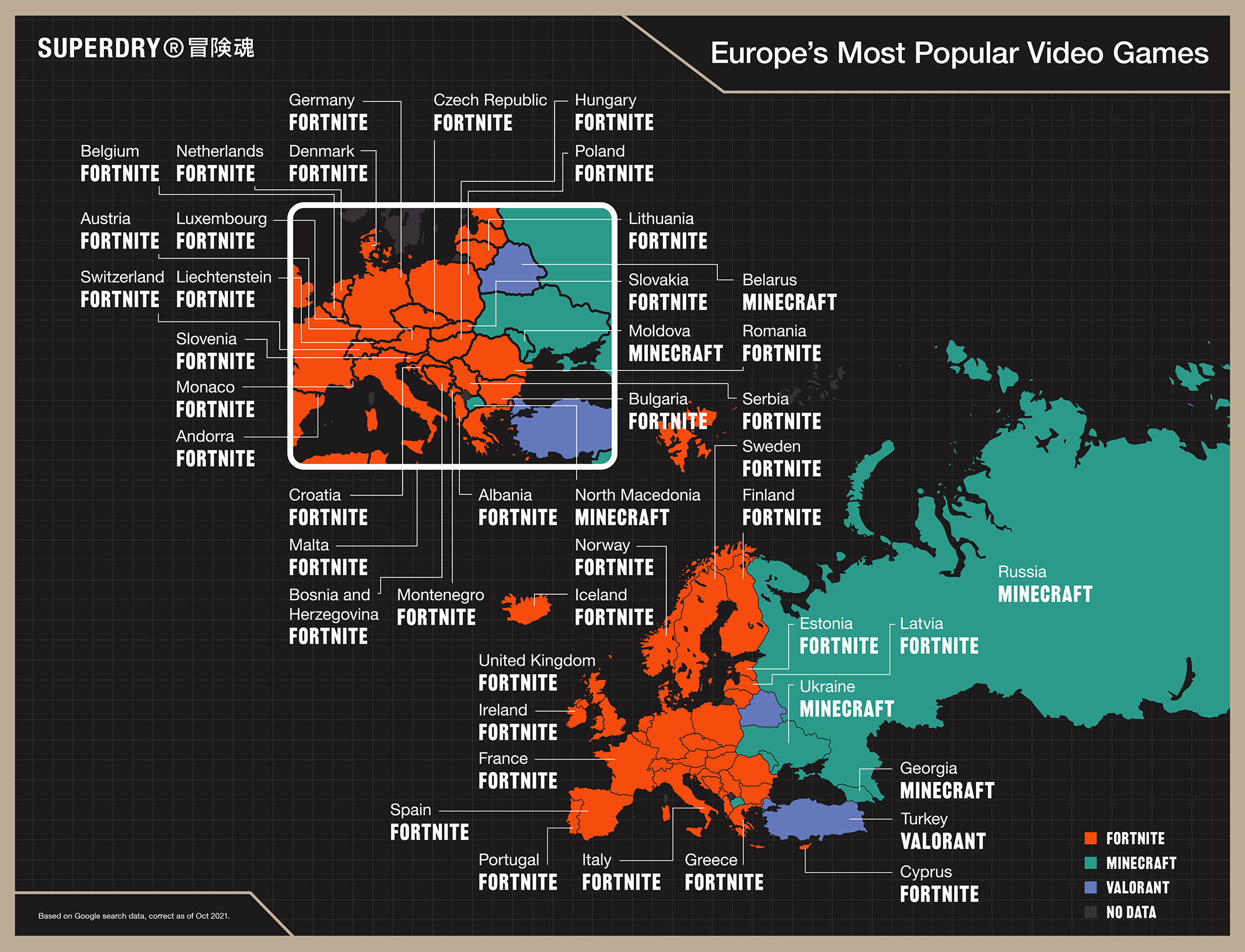 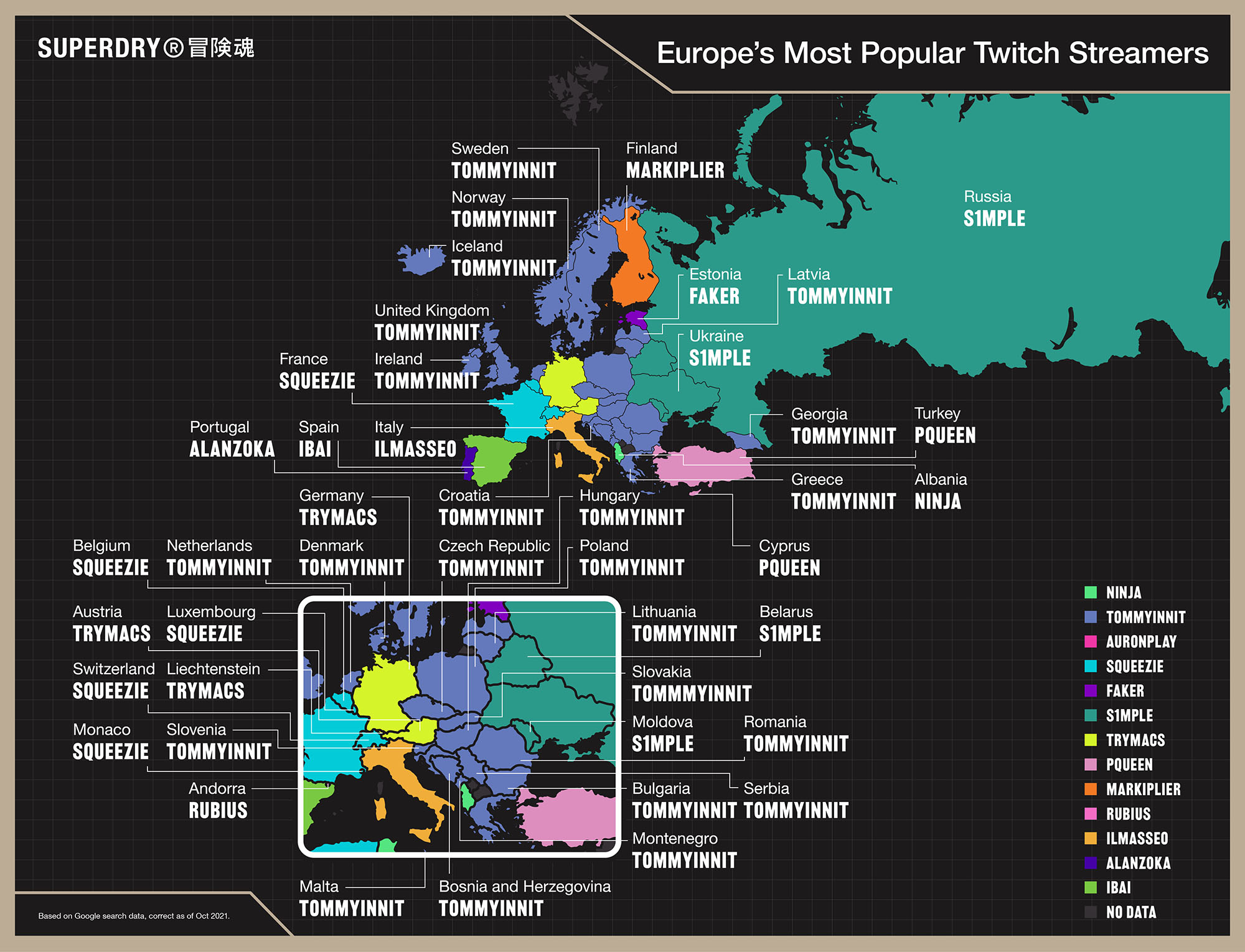 ASIA’S MOST SEARCHED FOR GAMES AND STREAMERS

Though Minecraft ranked as the second most popular game globally, in Asia Minecraft emerged as the most popular video game, with 23 countries, including Cambodia, Indonesia and the Philippines searching for it the most. Fortnite ranked in second position, proving most popular in 13 countries, and GTA V and Genshin Impact made up the most searched for games in Asia.

US-based streamer Ninja is the most popular streamer in Asia with 18 countries, from China to Sri Lanka, Googling him more than any other streamer. Popular UK streamer TommyInnit ranked in second place with nine countries, and South Korean League of Legends streamer Faker had five countries searching for
him the most. 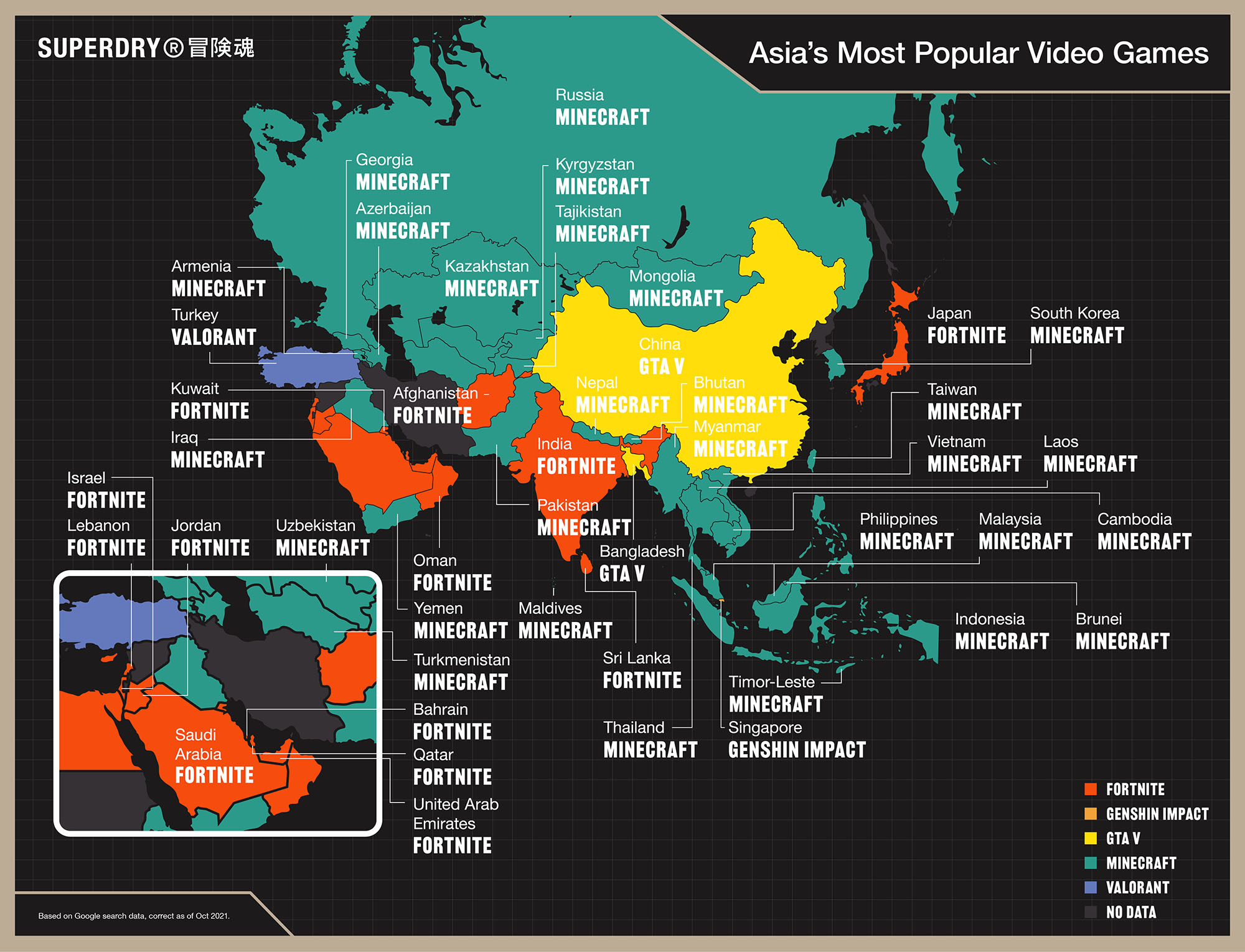 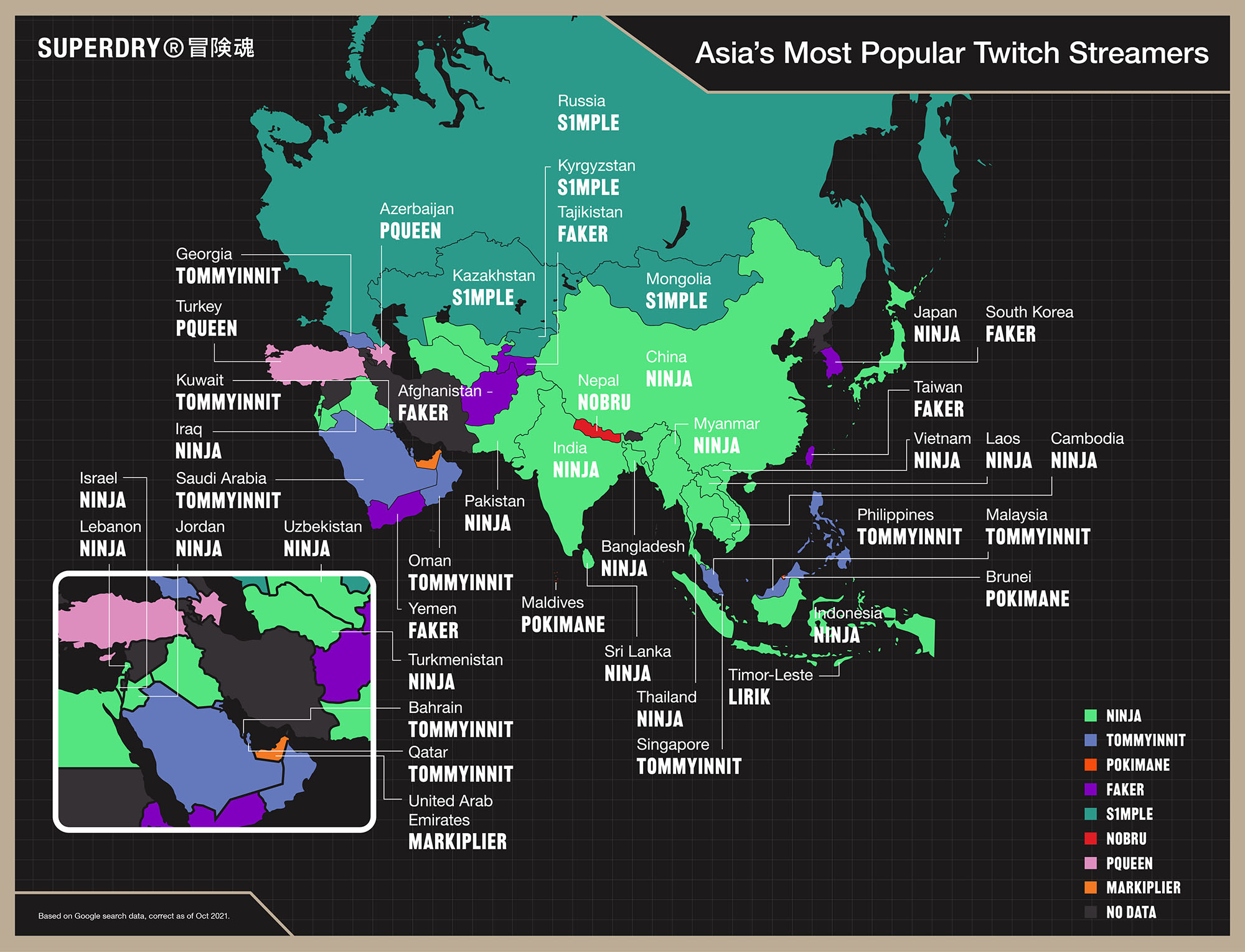 AFRICA’S MOST SEARCHED FOR GAMES AND STREAMERS

Only two games emerged as the most popular in Africa, with Fornite and Minecraft once again battling it out for top spot. Fortnite took the top spot with 37 African countries searching for the battle royale game, including Egypt and South Africa.

Ninja topped Africa’s list of most popular streamers, while Squeezie ranked in second position, and Brazil-based Nobru ranked in joint third position with Faker and Pokimane. 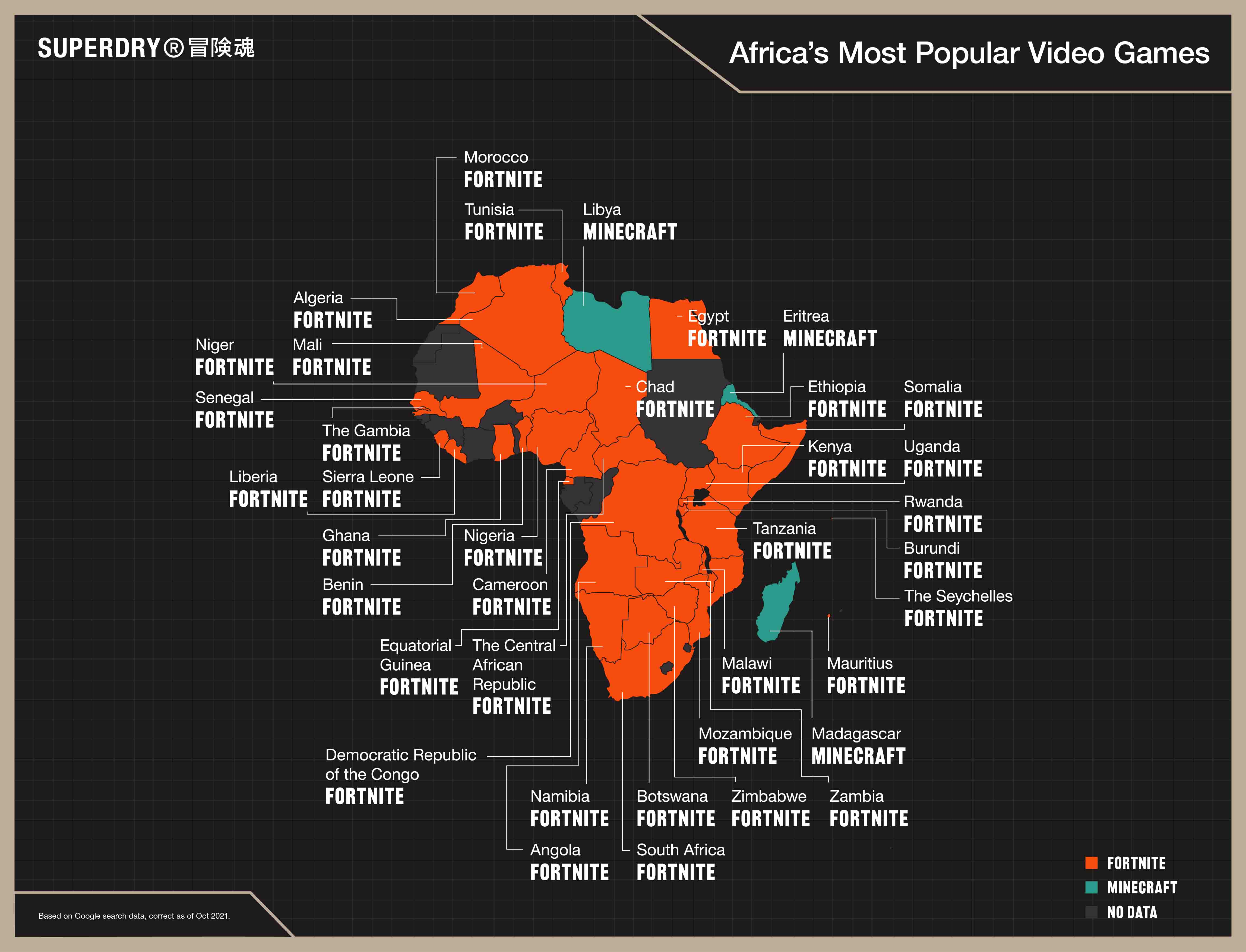 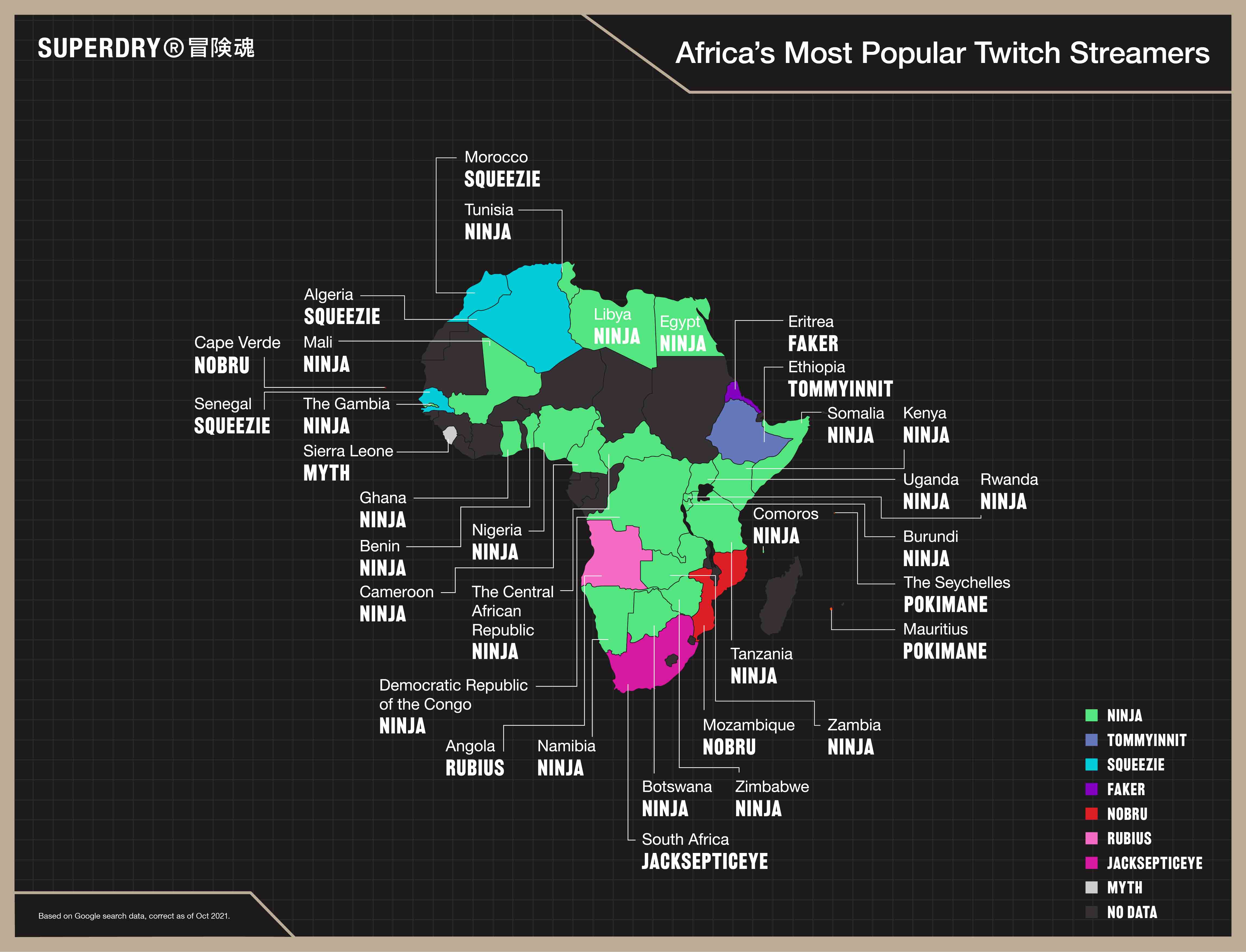 NORTH AND CENTRAL AMERICA’S MOST SEARCHED FOR GAMES AND STREAMERS

In North and Central America, it’s a similar story when it comes to the most searched for games, with only Fortnite and Minecraft emerging as the most
searched for.

When it comes to the most-loved Twitch users it is Spanish streamer AuronPlay, who ranks as third most popular streamer in the world overall, that tops the list, with seven countries searching for him. Moroccan-Canadian streamer Pokimane ranks in second position with countries including Belize and Dominica searching for the female streamer most. 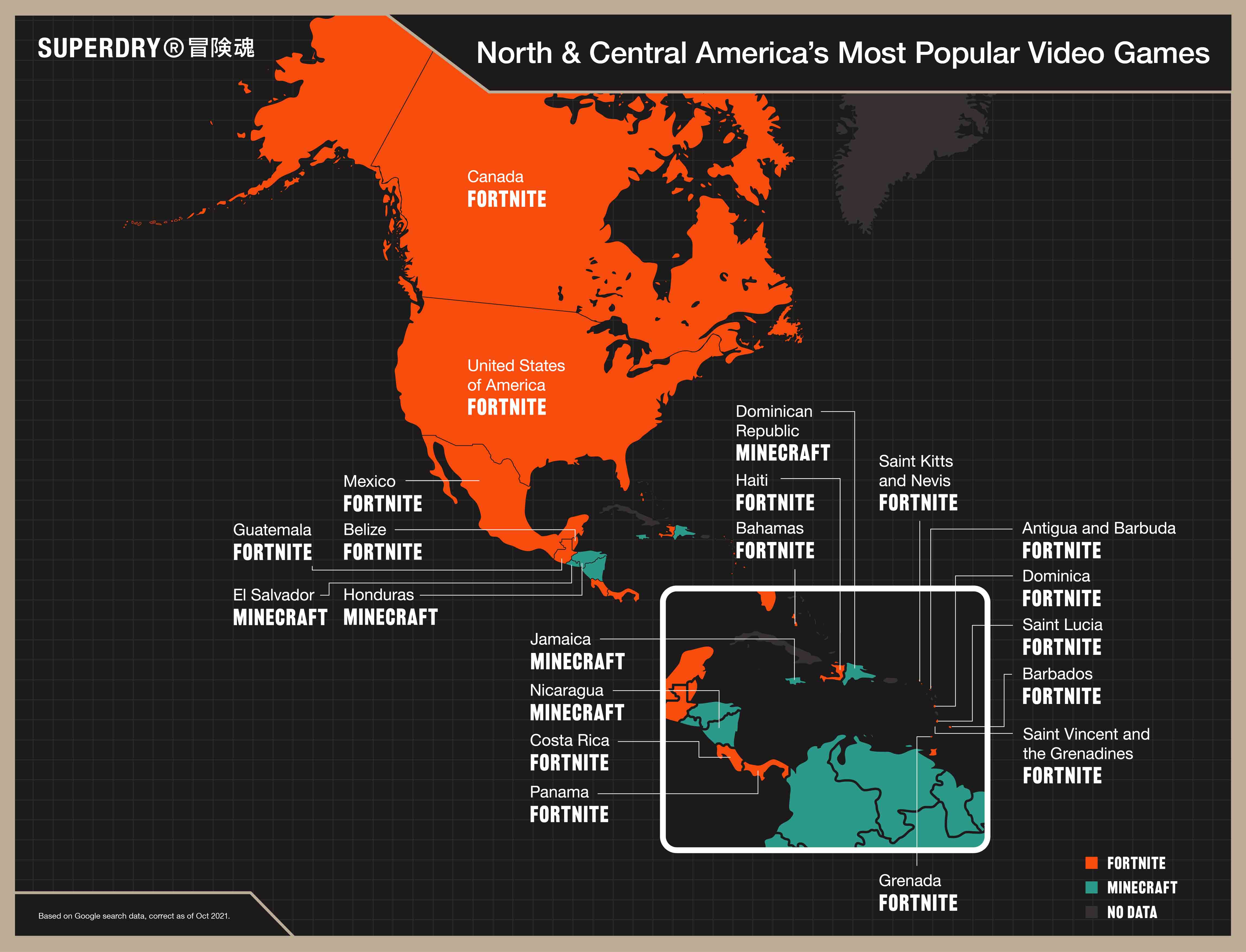 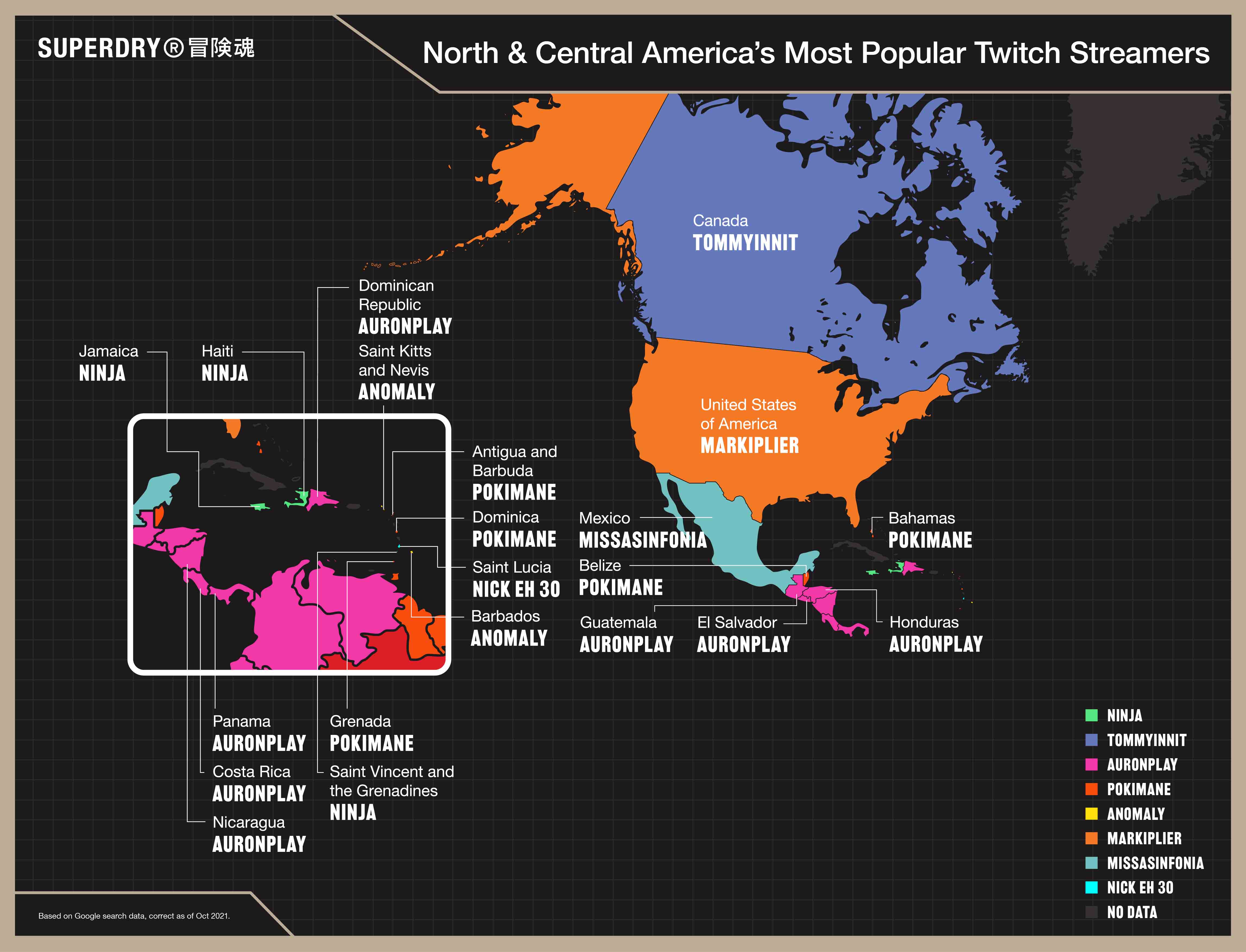 SOUTH AMERICA’S MOST SEARCHED FOR GAMES AND STREAMERS

In South America, Minecraft was the most searched for game with nine countries searching for it, including Brazil, Bolivia, Colombia and Peru. Fortnite was the most popular game in Argentina, Chile and Uruguay. 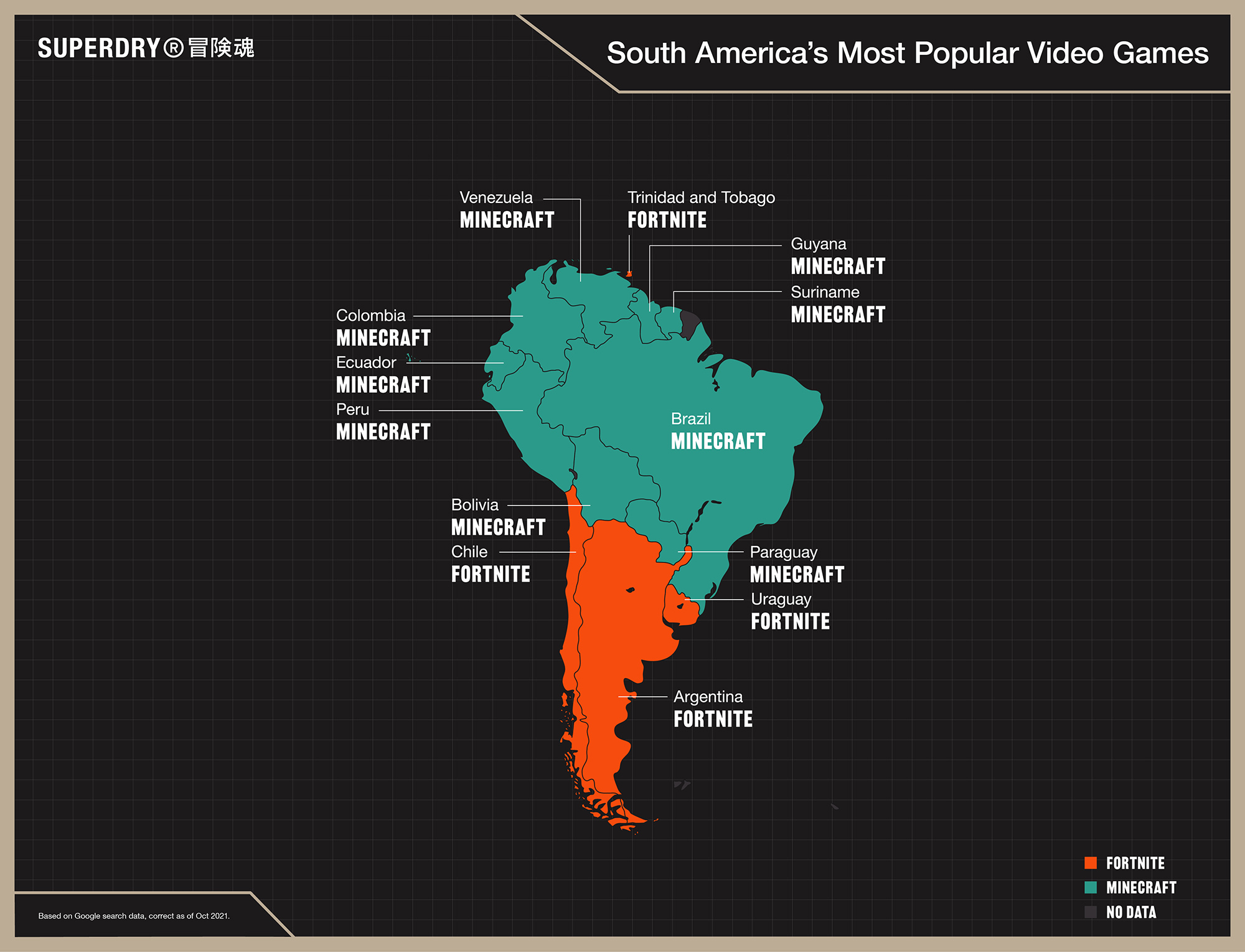 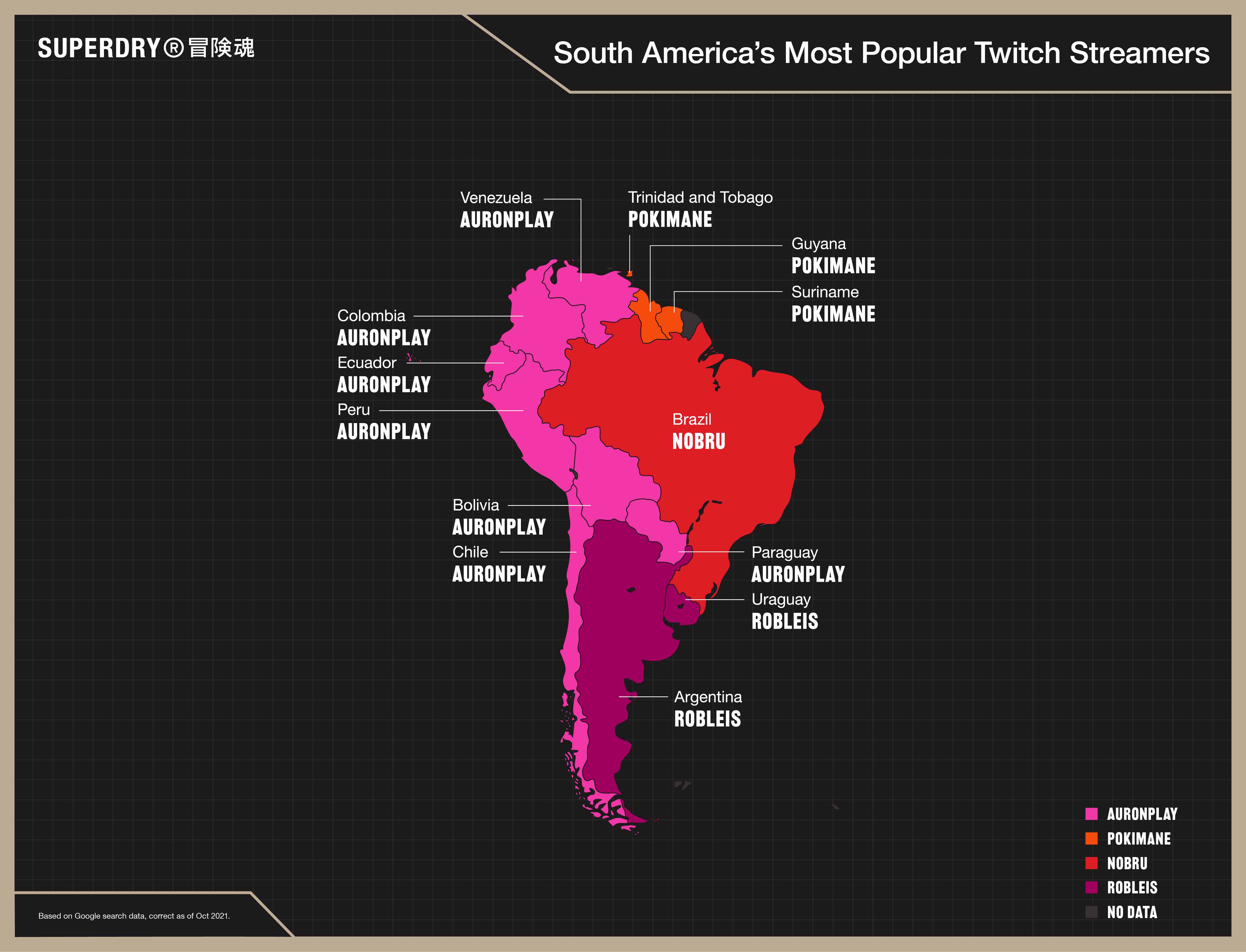 OCEANIA’S MOST SEARCHED FOR GAMES AND STREAMERS

Fortnite once again beats Minecraft when looking specifically at countries in Oceania, with six countries including Australia, New Zealand and Fiji searching for the hugely popular game the most. 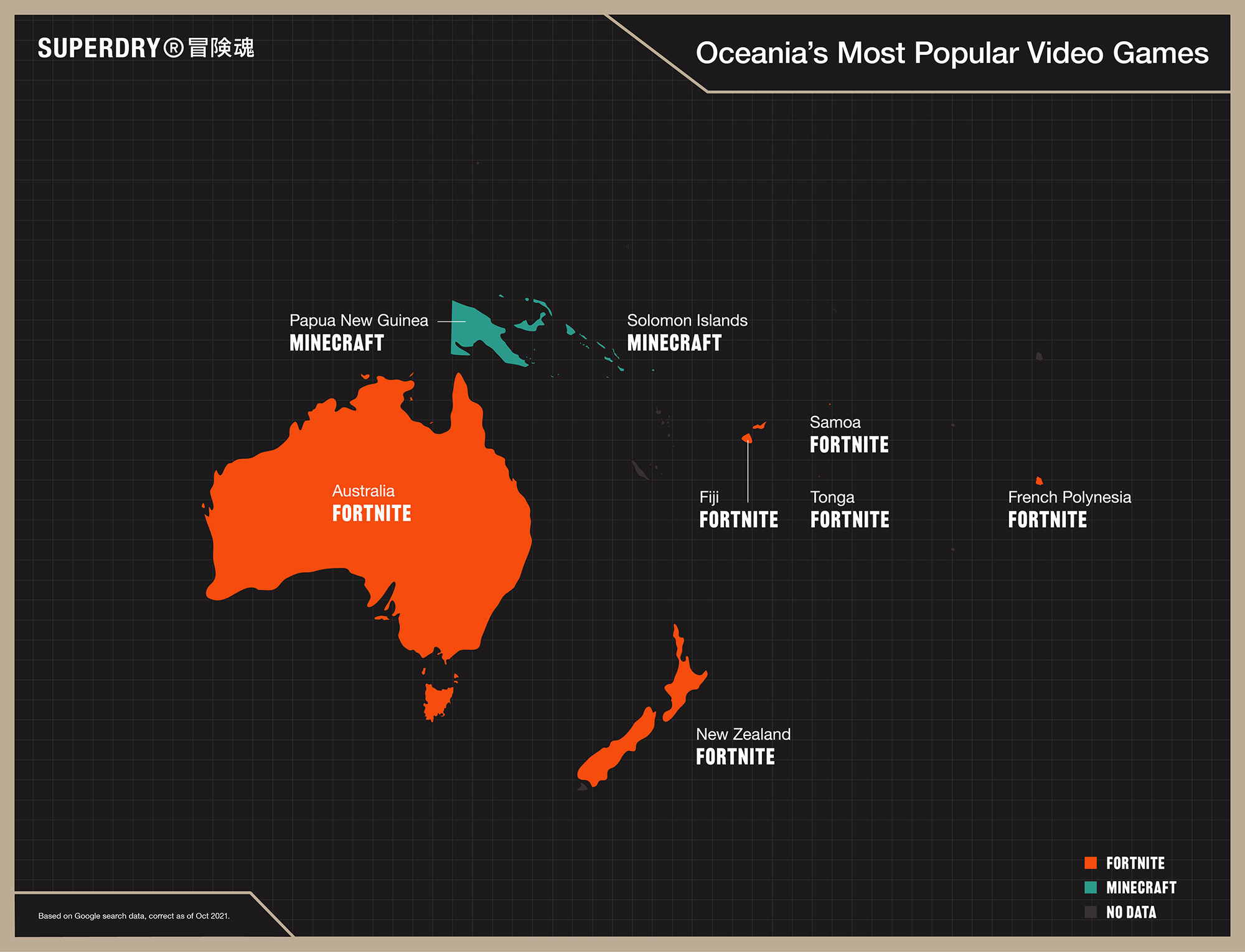 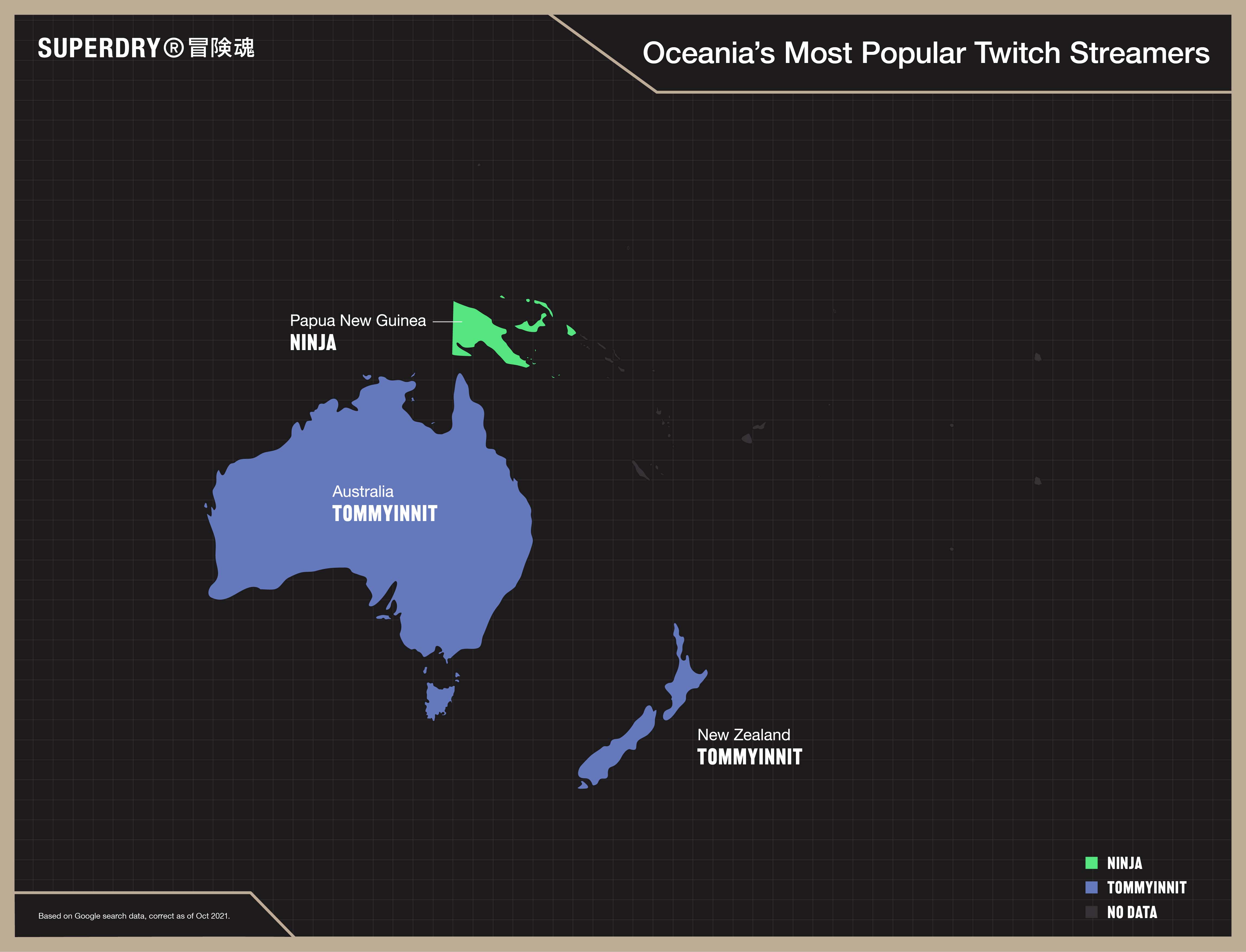 Whether it’s a staycation, an epic road trip or a tropical adventure, we hope this list has given you everything you need in travel inspiration for when you get out there again. Make sure you’re equipped with the right clothing - take a look at our jackets to keep yourself warm and dry, no matter where your escapades take you.

Worldwide search data was analysed by Superdry in October 2021 using Google Keyword Planner to reveal the most searched for games and streamers
in 182 countries.

Using Twitch Metrics, the 250 most followed Twitch streamers were recorded, and from this, researchers found the most searched for streamers in each country.

Using Google Keyword Planner, the top video games for each year since 2000 were also analysed, to reveal the most searched for video game in every country.

Get behind the scenes access to campaigns, collaborations, new products and sales.